WAVE AKADEMIE was a blast!

On October 11, our own Software Specialist Gregor Beyerle attended WAVE AKADEMIE Berlin’s Dissertation Presentation of Audio Engineering and 3-D/Game Design to demonstrate the StudioLive 32SC mixer’s DAW mode in conjunction with Studio One. The StudioLive 32SC is the new centerpiece of WAVE AKADEMIE’s “Soundlab,” where a large variety of both hardware and software instruments are accessible to the students.

Students and lecturers alike were amazed by the hybrid workflow of the StudioLive 32SC, which excels at integrating tons of outboard gear (like drum machines and synths) with software instruments, especially when used with Studio One. The ability to assign any channel to send or receive via analog, USB, or network gives WAVE AKADEMIE the flexibility they need in their Soundlab.
The ability to multitrack record jam sessions onto an SD card was also received with great enthusiasm, as it enables the students to record songs directly into the mixer before getting them into Studio One for post production.

Check out photos and video from the event below, and visit Wave-akademie.de for more information on upcoming events! 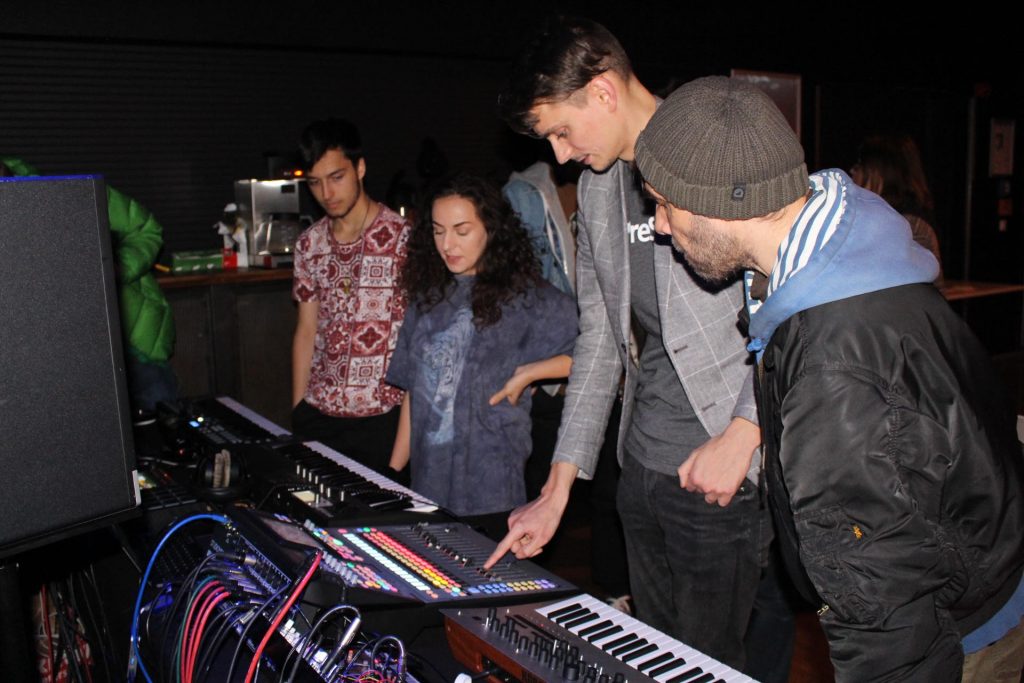 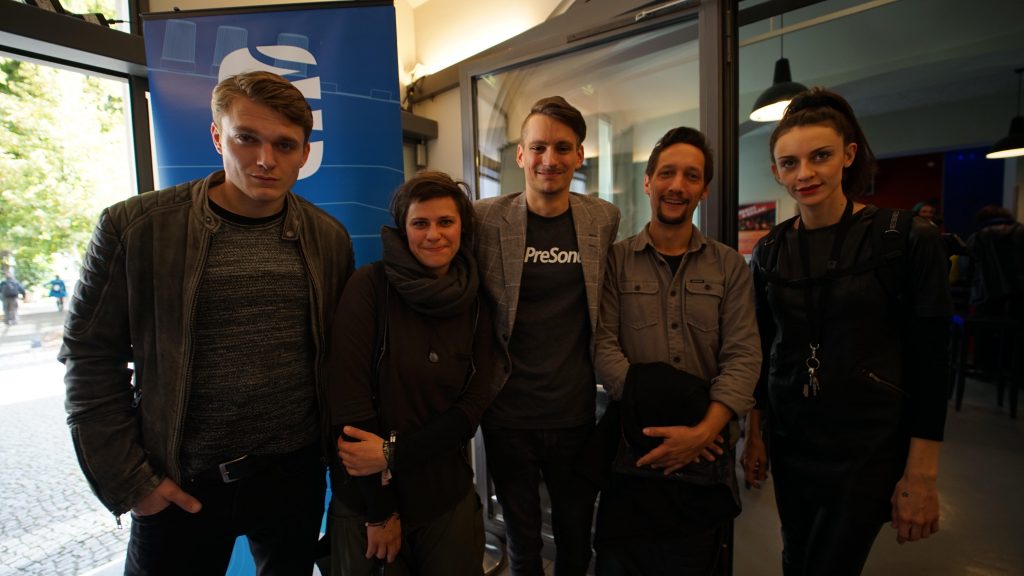 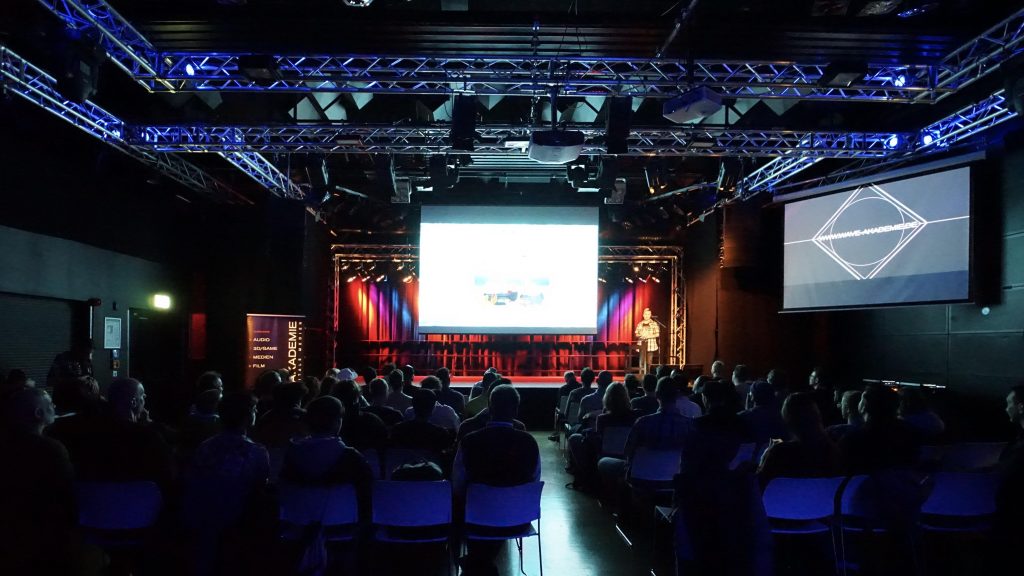 Guest Blog: On Recording The Music Of Children, by Chris Lott

Friend of PreSonus, Christopher Lott, joins us on the blog this week to share some of what he’s learned and discovered in his career! Let’s check out what Chris has to say!

ON RECORDING THE MUSIC OF CHILDREN

Every child is capable of making brilliant, disarming music. If a child is crafting the material, you can bet their songs will be unorthodox and singular creations. On first listen, their music might sound overwhelming, dense, abstract, even avant-garde! The lyrics are often zany and poetic, full of non-sequiturs. One moment might be miraculously melodious, and the next might explode with thorny note clusters, operating outside any “accepted” musical rules of tonality or rhythm. But if you open your ears enough to hear their music, it might just halt your heart.

As musicians, we know that the music reflects the artist’s consciousness. In music, one’s feelings and emotions can’t be hidden, they rise to the surface. Songs are the transcript of our unfiltered hearts in time. And whether it’s a pre-pubescent ode to deodorant (“The Deodorant Song”), a song-suite based on a video game storyline (“’Til Six Am”), or a student rapping the contents of their dream from the night before (“Shark Dream Rap”, these students are expressing how the world feels to them. The complex and stunning music of children is the reflection of their active creative minds: limitless, absorbent and open to surprise.

I have the extreme pleasure of being a music teacher at CHILD, Children’s Institute for Learning Differences in Renton, WA, just outside of Seattle, where I’m cultivating a music program with PreSonus gear. Our students are a unique population – all of them have behavior challenges which has lead them to live much harder lives than most of us can imagine. Some have been expelled from every school they’ve gone to, others lack the social skills to make friends. Many of our students are autistic, non-verbal or have self-confidence issues, anxiety, or lack the emotional regulation skills that make it difficult to function in their public school districts. Our school focuses on helping students connect with their social and emotional centers so they can get back into their public schools and live productive, fulfilling lives.

I find that these students have so much to say, because they’ve experienced so much. They have oceans of thoughts simmering under the surface and are hungry to express their singular worldview. My job is to encourage these students to express themselves through the art of sound.

At CHILD, students learn basic music skills, apply those to their own compositions and then record their music. We are basically a record label, a factory of production, where the output is focused on the student’s art. My hope for them as a music teacher is that they learn to trust their creative intuition, increase their awareness and have them grow a relationship with music that will last a lifetime. I help them transmutate their sonic curiosity and sensory wonder into audio art and act as musical partner in the roller-coaster ride!

PreSonus gear plays a huge part in our creative process. I’ve been using PreSonus since the very first time I’ve ever recorded anything, back in my early twenties recording professionally and haven’t stopped since. I have PreSonus gear in my personal studio for my band, Wall of Ears, and in my work studio at CHILD. I trust PreSonus because not only does the gear sound delicious but it is reliable, affordable and durable.

The ease of Studio One allows students to learn how to act as engineers and producers, recording their own and other student’s material. The students get giddy over overdubs on their sonic experiments, splicing audio to make it seamless, grinning when they hear their voices close mic’d through the headphones. The FaderPort Controller allows them to easily navigate their own sessions with its simple interface and large buttons, great for visual learners. PreSonus’ Education Team is responsive and helpful and works well with our students to create an amazing setting.

I enjoy asking my students about their musical choices.  In a very “free” instrumental coda section from the song “’Til Six Am”, the musician plays a keyboard riff that speeds up over time, building tension, similar to the Jaws theme song. When I asked about the origins of the accelerating melody, he informed me that the notes represent footsteps running up a creaky staircase which leads to an explosive “jump scare” of animatronic teddy bears. He was using melody to create a mimetic soundscape!

In order to assist in the music making process, I need to find out what are their musical interests and meet them where they are at. Do they gravitate towards video game music and playing with different synthesizer sounds? Do they prefer to improvise or create something more structured? What genres do they listen to? I often find myself in the role of enthusiastic producer. If they lean towards hip hop, I’ll start making a beat with them and use multiple takes of rapping to shape a song until the main concept emerges. An example is “I Need You,” where a student is ripping on subjects as wide-ranging as not chewing bubble gum in class to being an astronaut in space.

I find many students to be songbirds, even those with no previous musical training, with melodies and lyrics flossing through their opens brains like wild rivers. I have several natural lead singers, just waiting their whole lives for their backing band. Once the music is playing and they are in front of a microphone, the vocals flow effortlessly. I’ve seen a non-verbal student, normally unable to function more than ten seconds in a conversation, spew vocals over a whole song. It’s amazing to witness the power of music on a daily basis.

In the studio, I’ll set up some vocals mics and we’ll bounce ideas back and forth, until a skeletal foundation for the song exists. I follow their lead, using a guitar or a keyboard to help lay down some progressions or riffs or harmony, to help them achieve their vision. Often times, a song can be created start to finish in one thirty minute session. “Fight Song 2: You’re Extreme” is an example of a song written in one sitting, although it may sound labored over. It’s an extremely poetic punk rock anthem done in two spliced improvised takes with vocal swagger that evokes The Clash. By the time I had figured out a simple chord progression, the student was ready to roll.

As a music teacher, it is all a matter of helping the students find out how to be open to the voice inside. PreSonus makes it easier.

* Please find the CHILD Tapes Vol. 1 Playlist featuring several of the songs created by my students and mentioned in this article. Students’ names have been removed to preserve anonymity. Go ahead and listen to the magic for yourself!

Studio One Prime with Gregor!

Check it out! Gregor’s got a new series of videos for new users of Studio One Prime.  He covers everything from installation and setup to basic beatmaking, and even time-stretching and working with Ableton Live.

More to come from Gregor soon!

Want to make some music? Get started with Studio One Prime here.